The NBA Hall of Fame: 6 Players Everyone Knows and Admires

NBA has managed to produce the greatest basketball players of all time. The organization is full of stars that continue to shine and many that are considered legends. Here’s a list of the six greatest NBA players that everyone knows and admires.

Unsurprisingly, Michael Jordan tops this list as the most widely known basketball player of all time. His fame is partly because of his game and his endorsements like “Air Jordan,” Gatorade, etc. He was drafted by Chicago Bulls in 1984 and has won six NBA championships and five NBA MVP awards between the years 1988-96.

Kobe Bryant’s early and untimely demise still weighs heavy on the hearts of all the fans. He was a shooting guard for the Los Angeles Lakers for the entire duration of his 20-year long career. He won five NBA championships with the Lakers between the years 2000-09, with a three-peat from 2000-02. His name still goes down as one of the greatest players of all time in the NBA Hall of Fame.

LeBron James began his career in 2010 with Miami Heat as a shooting guard. In 2014, he moved to Cleveland Cavaliers and stayed there for four years. Finally, in 2018, the player got drafted by the Lakers and has played for them ever since. He has won two Olympic gold medals for the US, four NBA finals MVP titles, four NBA championship titles, and four NBA MVP awards. 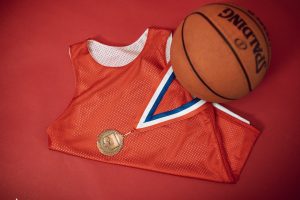 Shaq is considered one of the greatest centers that have ever been part of the NBA. In his long career, he has played a total of 19 NBA seasons. He played eight seasons with the Los Angeles Lakers and had a three-peat from 2000-02. He had also been drafted by other major teams like Boston Celtics, Miami Heat, Phoenix Suns, and Cleveland Cavaliers before retiring in 2011.

Kareem Abdul-Jabbar is regarded as NBA’s all-time leading scorer. In his 20-year long NBA career, he has played as a center for Milwaukee Bucks and Los Angeles Lakers. He won a total of six NBA titles, out of which five were with the Lakers. He’s responsible for giving the Los Angeles Lakers a whole new legacy and making them a fan favorite.

In 1980, Magic Johnson managed to win an MVP title and a championship in his rookie year. He went on to win four more championships for the Los Angeles Lakers in his position as a point guard. In 13-year long NBA career, he managed to make an appearance in nine NBA finals. He’s one of the most well-known players that are still remembered to this day.

Get Your Free NBA Expert Picks with Charlies Sports

We have expert sports handicappers at Charlies Sports who have over three decades of experience in the sports betting industry. We can guide you on the best teams to bet on in the current NBA season. You can get our free NFL picks, free NBA picks, and free MLB picks if you want to make some quick and confirmed money.